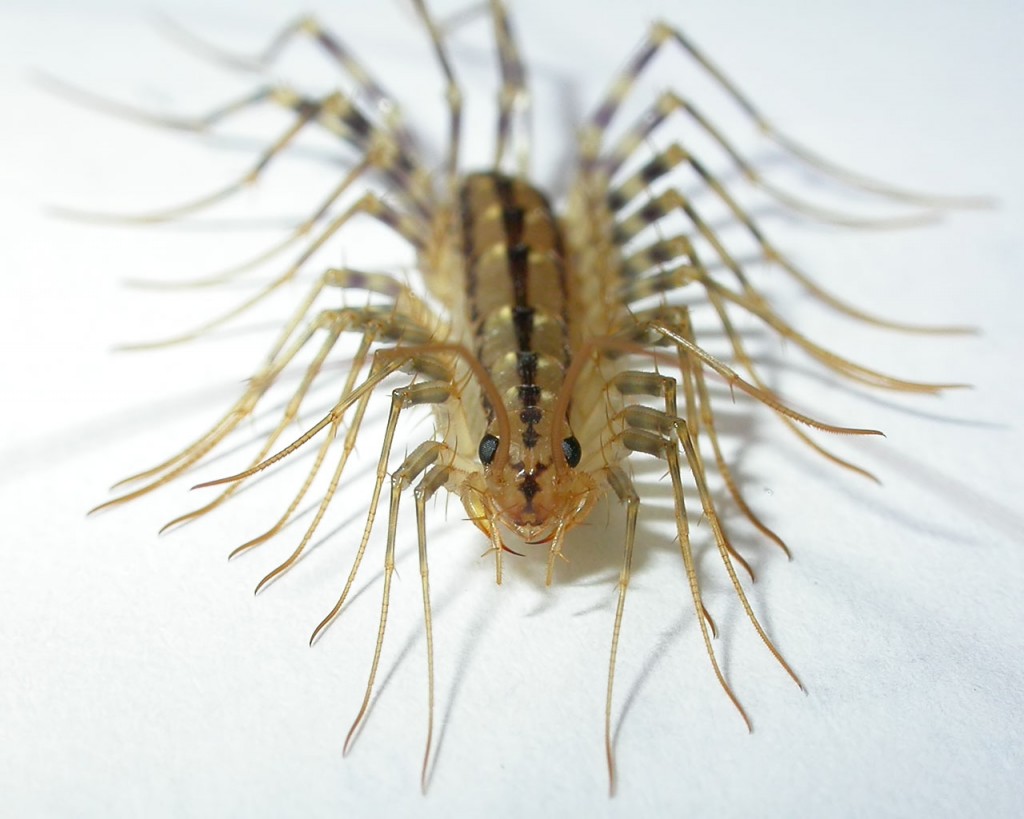 Centipedes (from Latin prefix centi-, “hundred”, and pes, pedis, “foot”) are arthropods belonging to the class Chilopoda of the subphylum Myriapoda. They are elongated metameric creatures with one pair of legs per body segment. Despite the name, centipedes can have a varying number of legs from under 20 to over 300. Except for one species having 96 legs (48 pairs), centipedes always have an odd number of pairs of legs—for example, 15 or 17 pairs (30 or 34 legs). Therefore, there is no centipede with exactly 100 legs. A key trait uniting this group is a pair of venom claws or forcipules formed from a modified first appendage. Centipedes are a predominantly carnivorous taxon.

Centipedes normally have a drab coloration combining shades of brown and red. Cavernicolous (cave-dwelling) and subterranean species may lack pigmentation and many tropical scolopendromorphs have bright aposematic colours. Size can range from a few millimetres in the smaller lithobiomorphs and geophilomorphs to about 30 cm (12 in) in the largest scolopendromorphs. Centipedes can be found in a wide variety of environments.

Worldwide, there are estimated to be 8,000 species of centipede, of which 3,000 have been described. Centipedes have a wide geographical range where they even reach beyond the Arctic Circle. Centipedes are found in an array of terrestrial habitats from tropical rainforests to deserts. Within these habitats, centipedes require a moist micro-habitat because they lack the waxy cuticle of insects and arachnids, and so lose water rapidly through the skin. Accordingly, they are found in soil and leaf litter, under stones and dead wood, and inside logs. Centipedes are among the largest terrestrial invertebrate predators and often contribute significantly to the invertebrate predatory biomass in terrestrial ecosystems.